skip to main | skip to sidebar

A new home of MyKeePass

I found wikidot.com had many nice features, especially it provided forum. So I decided to host MyKeePass there. Please use the address below to enter your comments and suggestions:
http://mykeepass.wikidot.com/start

I know neither of these two new features are perfect. KeePass 2.0 is not editable; and users still cannot access DropBox private files. I will be working to make them better :-)

Update
The way MyKeePass revealing password has been changed. Now instead of clicking "Edit" button, you should click the big ugly asterisk button above username (on the right side) to see your password!
Posted by DuckPond at 7:51 PM 151 comments:

I am still testing it myself. If I couldn't find big issues of it, I will submit this Sunday.

I will release it after fixing some other issues and testing, hopefully in around 3 weeks;

A complete support of DropBox will not be available as DropBox hasn't released their API yet. 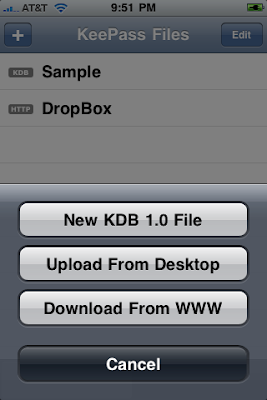 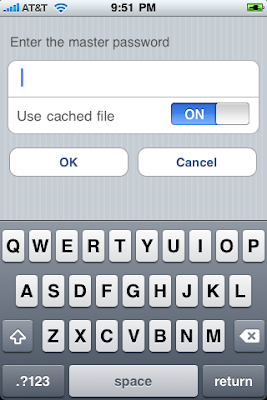 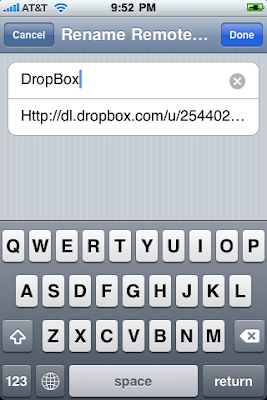 MyKeePass KDBX and DropBox Support is under development

I have seen a lot of requests for supporting of Kdb 2.0 file, and DropBox. So I decided to add these two features the next release.
I have already made some progress on the first feature (Kdb 2.0 support). Below are two screenshots of the version still under development. The first screenshot shows KDBX files are listed on "Files" window; the second screenshot shows a sample entry of KDBX file. Besides standard KDB files (username, passwords etc), you can also see that additional custom fields "hello" and "hello2": 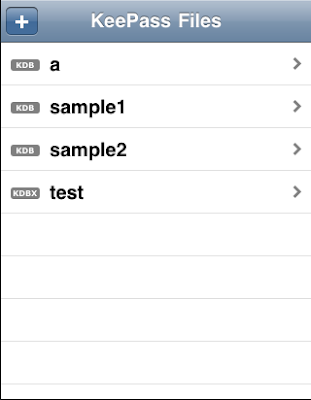 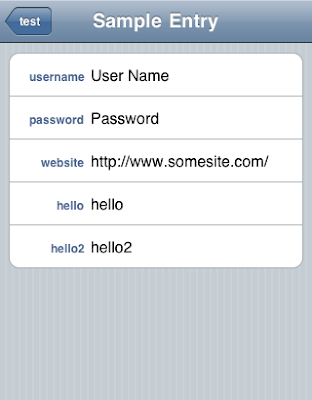 I just found version 1.02 will cause password entry display issue. For that reason, I removed it from Apple store. Version 1.03 has been submitted to fix this problem, and it is currently under review.
The display issue cannot be fixed on iPhone OS 3.0. So version 1.03 will only for OS 3.1. I apologize for this display problem.
Update: Version 1.03 is available now. The only feature added is to hide/show password with the edit button.
Posted by DuckPond at 7:33 PM 32 comments:

Version 1.0.1 is a minor release. It provides the following features:
1. copy username/password and comments;
2. open Safari directly in MyKeePass with username or password copied; 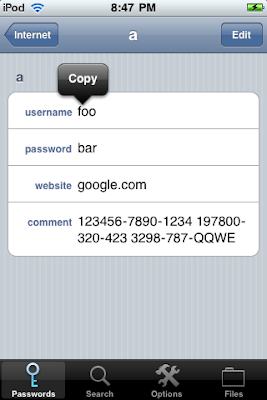 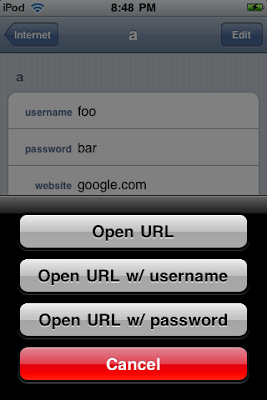